In Celebration of the U.S. Constitution

Free mini copies of the United States Constitution are available in the Ozuna Library on the Bill of Rights exhibit. 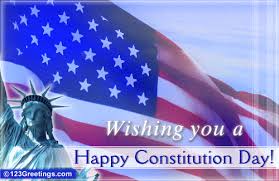 What is U.S. Constitution Day?

What Is Constitution Day?

Most Americans know that July 4th is our nation's birthday.  Far fewer Americans know that September 17th is the birthday of our government, the date in 1787 on which delegates to the Philadelphia Convention completed and signed the U.S. Constitution.

The ideas on which America was founded--commitments to the rule of law, limited government and the ideals of liberty, equality and justice--are embodied in the Constitution, the oldest written constitution of any nation on Earth.  Constitution Day is intended to celebrate not only the birthday of our government, but the ideas that make us Americans.